I have these pictures on the kennel website, but I thought I would post them here for additional reference.

These two Poongsans were sent by the now deceased North Korean leader Kim, Jong Il in 2000 to South Korea.  They were 6 months old in the pictures. 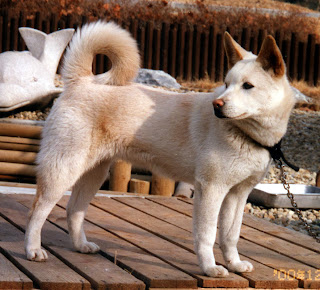 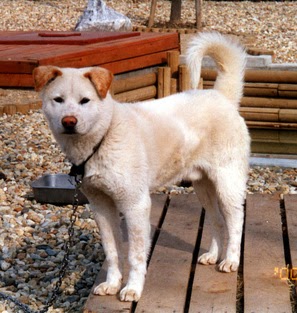 
These Poongsans were sent by the current North Korean leader Kim, Jong Un to South Korea's Reverend Moon.
http://in.finance.yahoo.com/photos/top-news-photos-1370239005-slideshow/north-korean-poongsan-dogs-seen-near-cheongshim-peace-photo-010714855.html
Posted by ayk at 12:49 PM No comments:

I've wanted to purchase a Nina Ottosson dog puzzle toy for years, but I just couldn't justify paying upwards of $40 for a dog toy that the dogs could destroy or get bored off.

So when I saw this Kyjen Dog Spinner toy at my local petstore, I thought, "Good enough at a reasonable price."

Here is PoongSoon's third try at the toy:

And here is HwangYoung's third try at the toy:

Both dogs can get to the treats inside the toy, but HwangYoung has a greater reluctance to possibly "break the rules" and go at something that he's not sure he's allowed to manipulate.

The following blogpost has been making its rounds on Facebook.   I think it a very simple but clear illustration of temperament/behavior and so I recommend reading it in its entirety.


I like it so much because it parallels my outlook on temperament & behavior in Jindos.


The following is not an ideal situation in my book: 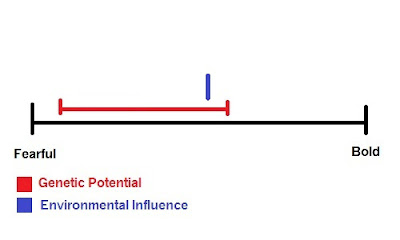 I don't think it normal for a Jindo to be so fearful that it takes a huge amount of work to have the dog behave reasonably.  I do not believe that requiring hundreds of hours with a behaviorist or thousands of dollars in paying in a trainer should become the norm for a Jindo.

Kudos to the owner for sticking with the dog and putting in so much effort into the dog, but for a Jindo breeder, this is not an ideal situation at all.

My memory of Jindo dogs are more of the below scale: 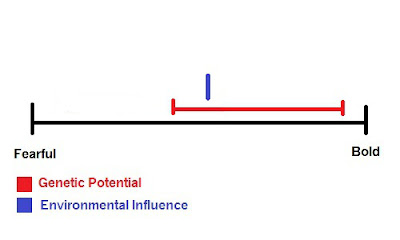 Dogs who are bold and not well-socialized are still known as "smart" dogs who don't require a lot of effort on the part of the human.  Since most Koreans don't commit heavily to socialization and training, dogs are still good family dogs but not reaching their maximum potential.

The occasional Korean that does do the socialization and training of the bold dogs are rewarded with dogs of exceptional talents.  ie. the ones known as being as smart as a human child, reading minds, and so forth.


I hope I produce dogs like this so that more people can enjoy what the hype about Jindos is all about.
Posted by ayk at 7:54 PM No comments:

This morning, I was entertaining notions of importing a Japanese Shikoku.

Recently, there was a flurry of discussion on the Nihon Ken Forum when a 1.5 yr old male Shikoku imported from a famous kennel in Japan was going to be neutered and rehomed.

There were, in my opinion, so many insensible decisions in how this dog was handled, that I came out thinking "If you want to have it done right, you have to do it yourself."

This morning, when I learned of an available male in Denmark looking for a new home, I thought about whether he could add something, pedigree-wise, to the small population of Shikoku in southern California.

Then thoughts migrated to whether I should get a puppy from a Shikoku litter in Korea that's bound to be outcrosses to what's in California.

Then thoughts moved to "I might as well import an adult Shikoku which is a known quantity, rather than a puppy that is a big risk.  I don't have any issues with the idea of dealing with an adult who probably won't get along with other dogs."

I was still contemplating this, and self-congratulating myself about my willingness to import an adult Shikoku, when I learned about a group of people who are planning on importing and establishing Hokkaido in North America.

I lost my desire to get a Shikoku then.


For a while, I couldn't figure out why my interest just evaporated into thin air.  There's no squandering of Shikoku efforts by having a Hokkaido effort so it's not like there's a "betrayal" involved.

PoongSoon helped me figure it out though.  As she layed on the ground, wagging her tail and asking me to play with her, I realized that all the talk about "preservation" wasn't me nor my interest.

I never intended to be a preserver of Jindos and Poongsans when I started this.  I still don't.  All I wanted to do is have some dogs with the temperament that I enjoy and that the people sincere in their interest in Korean dogs can enjoy in the future.  The direction of the entire breed, the preservation of the entire breed - that's beyond my connections, my resources, and frankly, my willing to accept responsibility for.  I just want to be responsible for my "small scale hobby kennel."


So, to even consider picking up yet another breed and become "THE PRESERVER" of not just the population in CA but also Japan is just silly talk for me.  An ego trip for sure, but ultimately, not something that's right for me. 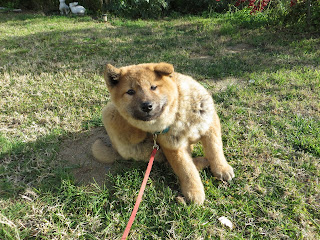